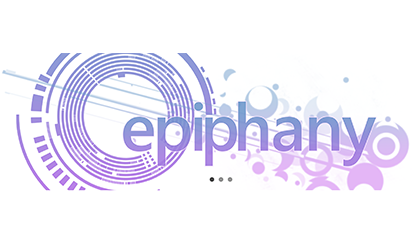 A tabletop RPG that plays with an smartphone app instead of dice. Just sit and play, and let the app take care of the complex rules.

Epiphany put players in a dystopic world where emotions do not belong to people: they are bought. Citizens must earn their right to be themselves through work and live in compliance with a society that have some traits of George Orwell’s 1984. The players, nonetheless, are special because they can use the emotions and order the system to work for them instead of the opposite. They can even work miracles that draw the line very near to “magic”. The premise it’s clear: players have the potential to make the world what they want it to be. But… what would that be?

Epiphany is a lot about characters and the world they are in. It’s gameplay is very narrative-oriented and the rules for players are minimal. This is achieved by the smartphone app: it hides all complicated stuff and players, in matter of seconds, resolve complex situations and focus on the storytelling.

This project took about a year with a team of four people to write. It’s already written, but is still in the process of translation and illustration by our artists.

A board game for a very flexible number of players. Agile to play, easy to learn, deep enough to make for a lot of different playstyles. My first entry in the board game industry to Ludopolis 2013 International Board Game Contest, and classified as top 10 among 144 games from 28 countries.

Classified in Top 10 as Finalist!

In Satrap, you control a family of villagers in a newly founded town. You will expand the city by building, but other players can benefit from your own plans and steal from you. My main philosophy of design in this game was for the mechanics to keep them simple, have lot of meaningful choices, a fair risk/reward balance, and to enforce improvisation through tempting the player to change her playstyle.

I achieved this by crafting with a lot of care the victory conditions and the turn mechanics: the rules are generic and simple, turns are quick, and it is in the cards where the complexity lies. The victory conditions make the player wonder about their playstyle: “Do I keep farming, or should I steal my rival’s Inn?”.

Fate Game was my submission for 2012 1Km1KT contest:  Make a game in 24 hours.  It was made in approximately 24 hours. It’s a competitive storytelling game where the players are gods and make tweaks to a certain story in order to turn events to their own purposes. This game features a competitive gameplay where a group of players take the role of “gods” directing the lives of people in a small town in a very closed island. By turns, the gods must try to twist the story making the villagers turn the story to their assigned “dominion”: for example Chaos, Romance or Corruption. Each story will grant them some Victory points. At the end of a certain number of turns, the god with most Victory points will impose its own viewpoint and write the destiny of the island inhabitants.

This game was my first strike at Game Design, a bunch of years ago. It is a classic dungeon crawler, so “classic” that it really is a highly modded version of HeroQuest. Overall, you can expect your good’old dungeoncrawling: handfuls of dice, very simple rules, lots of character classes, interesting choices, loot, monsters, summonings, magic, treasures, epic adventures, divine gifts…

But Sword of Dragon, with almost 11 years of iterations over the original one and hundreds of adventures played, has come to get its own flavour. It has its own rulebook, different mechanics and almost every mechanic of the original Heroquest has been adjusted, modified or simply removed.We still play it some weekends, or when we want to initate someone to roleplaying.

V1RU5 is an “Arcade” L.A.R.P. (Live Action Role Playing) ready to print and play. It is about a cruise trip, but suddenly something goes wrong… It is designed to be played between 10 and 30 players, 1 DM per 10 players. It’s very light on rules. Mature theme: Recommended age 13+.

A different kind of LARP. This LARP needs only 1 DM and it is computer aided, so you will need a PC and a certain software (included) to assist you through the LARP events. The players enjoyed this one very much so I think may be reworking and scalling this computer-aided LARP system in the future, making it much, much bigger and flexible. (Quick-prepared LARP’s? Amazing!)

“Veneno” is set in a horror/chtulhu-esque mood. A group of friends (the players) gather together to spend happily the weekend, when one of them finds a short, strange message:  everyone is poisoned.

Half- sport, half-rpg; KAISEN II is a new concept of team-based fun. Select your character and battle with a turn system in a soft-combat style. You can play Kaisen II independently of your sport skills, there’s always a character appropiate for you! Kaisen II is an outdoor game intended for youth associations and groups of between 6-20 people.

KAISEN II has been tested a lot and it was deeply enjoyed by the youth association at my hometown in which I was volunteering.

Sometimes when sitting in front of the computer my mind wanders into the negative effects of sitting for long stretches of time. There’s plenty of info online on the topic. I take a health supplement I order through kratommasters.com to ensure I’m at least giving my body the nutrients it requires. Hopefully that and exercising when I can is enough you know.